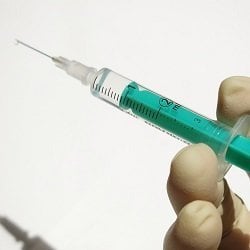 It has emerged that delegates of a Botox training course practiced used needles and dissection on a human corpse.

A university anatomy department handed over a body which had been donated for scientific purposes for a 2-day course in injectable skin treatments at Newcastle University. Trainees used needles on the cadaver’s face and also were allowed to dissect the skin.

Organisers of the course even filmed the treatments and a video was posted online, but has since been removed amid the controversy and media exposure, according to the Daily Mail.

Critics said the use of a corpse for this sort of training is an abuse of the goodwill of those who chose to give up their bodies for medical training and research. One said:

“A human cadaver donated to a university should only be used for scientific and medical development by professionals who have earned the right to dissect it respectfully and not for probing by non-medics such as beauticians.”

The training course was organised by Manchester-based Cosmetic Couture, who train beauticians in injectable cosmetic treatments. This in itself has also caused concern. Under the law, Botox has to be prescribed by a doctor. However, it can be injected by anyone without any need for qualification – a situation which is likely to change following recommendations of the HEE and previously the Keogh report. A spokesperson for Cosmetic Couture said the aim of their course was to boost patient safety, explaining:

“The two days provided an invaluable resource for a small number of practitioners to study in depth the nerve structures of the face and to ensure that the highest level of safety and protection is offered to clients undergoing cosmetic procedures.”

“A cadaver dissection course geared towards non-medics beggars belief. This is nothing but an abuse of donated cadavers whose study is meant to promote health and science.”

“Donating a body to science is such a sensitive issue that you would not expect a beautician to be prodding and probing your face further her tricks and skills to enhance people’s faces for vain reasons.”

There are reputable courses in the UK where delegates can practice techniques on live models.

SkinViva Training Academy, based in Manchester, arrange a number of models for each of their cosmetic treatment training courses; enabling delegates to watch demonstrations and then practice techniques themselves, watched and guided by practising Aesthetic Doctors from SkinViva’s team.

For further information, to discuss which course is right for you, to enquire about availability or to book a training course please call 0161 850 2491, email info@skinvivatraining.com.