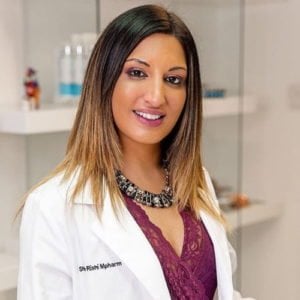 Skinjector Shikha shares her experience of entering the aesthetics business from the pharmacy sector.

Following her training, she has established her own successful business, Elegant Aesthetic Beauty Clinic, based in Poole.

What drew you to medical aesthetics?

“My journey into aesthetics began in 2015, when I was feeling jaded about working in the pressure-cooker of community pharmacy and was looking for something more fulfilling.

“I’d always been interested in make-up and beauty, experimenting with looks for myself and others, but found myself drawn to the world of aesthetics, where I could find longer-term solutions for people to look their best. I still loved the consultation element of pharmacy, enjoying the patient interaction that comes with medication reviews, so I knew I could use this to my advantage.”

What’s the best bit about working in aesthetics?

“Over the last 4 years, the best part about my job has been seeing the improvement in confidence I’ve given my clients. It’s such an amazing feeling when you get a great result from your work, and for some people it really is life changing. I can be on a night out with my friends or colleagues and be surrounded by possibly 10 people who I’ve successfully treated, and seeing the difference in them makes me so proud of what I do.”

Are there any downsides?

“It would be unrealistic to say there are no downsides to working in aesthetics. The most nerve-wracking for me was the potential complications, especially in that first year. Being a pharmacist, you’re so used to being able to confer with a colleague about drug interactions or side effects, it’s pretty daunting to be completely on your own with no backup to hand.”

“I found the difference in regulation across the board a bitter pill to swallow. Being on the pharmaceutical register means I’m still accountable to the GPHC, so I must abide by much more stringent regulation than, say, a beauty therapist who could legally inject dermal fillers from the back of their car if they were so inclined. Admittedly this has garnered a bit of a backlash in the media over the last few years, so hopefully the government will take note and start implementing some changes soon.

How do you feel about moving from pharmacy to aesthetics?

“At the end of the day I’m glad I made the decision to pursue this new career path because I look back and see how far I’ve come in such a short time and feel empowered by my growing independence and self-belief.”

What advice would you give to someone starting out?

“When I started out, I had no idea how much training I’d need to do or even that BOTOX® would need to be legally prescribed for treatment. So, to help you avoid the same pitfalls, I want to share my experience with you and pass along the tips I’ve learnt along the way.

How does the lack of regulation in the market affect you?

“I did initially worry that the market was getting too saturated due to the lack of regulation required. However, demand is increasing exponentially, with the age of social media making aesthetics more mainstream. And I believe that if you have a genuine passion for your business, it makes the world of difference. A lot of my clients have said that they have more trust in me as a pharmacist due to my medical background, and they would rather be treated by a registered professional because of the expectation of accountability.

“On that note, you may hesitant about making the move to aesthetics because you worry about losing your GPHC registration if something goes wrong. But if you have the correct insurance, specifically for cosmetics, this shouldn’t be something to hold you back. I personally use Cosmetic Insure, as I found they were the most accommodating to pharmacists. Last year, the GPHC and Joint Council for Cosmetic Practitioners entered into an agreement to work together on areas such as fitness to practice complaints, so there should now be more support and understanding from the industry if issues like this should arise.”

“Now, I chose to commit myself to the extra studying to gain my Independent Prescriber qualification in order to prescribe the prescription-only meds I needed for treatments. It’s not for everyone; it’s arduous, hard to find a placement, and not actually necessary to become an aesthetics practitioner. However, after years of working in pharmacy and therefore being the most professionally responsible person in the room, the thought of having to ask someone else to give that final approval over my patient’s treatment didn’t sit well with me. Not to mention that I had endured years of training to get where I was, and I was unwilling to delegate my authority like that. But if you have a close working relationship with a prescriber, this shouldn’t be an obstacle. Just be aware it’s something you need to consider beforehand.

“Becoming an Independent Prescriber doesn’t always open doors for you in the aesthetics field. Although there is a changing mindset due to the surge in pharmacists converting to this area, the medical manufacturers and many trainers still see pharmacists of all types to be sub-par to the other registered professionals such as doctors, dentist and nurses. Because of this, it is sometimes hard to gain access to training which is based on medical qualifications rather than aesthetics experience. For example, I was personally invited to attend an exhibition for dermal fillers by a major drug manufacturer, as I routinely prescribe and use their products in my practice. I attended with a nurse from my clinic and was abruptly and mortifyingly turned away from the door, as I didn’t possess what they considered to be an acceptable qualification. It didn’t matter that I had by then completed the Lip Enhancement course at SkinViva and was therefore the one with experience in the subject matter and the ability to prescribe the products demonstrated.”

How does a pharmacy background help in aesthetics?

“There are so many skills that you can bring to the job as a pharmacist. The clinical knowledge of the chemistry in the body and drug interactions are the obvious, but patients also appreciate the way I’m able to explain things clearly in layman’s terms like I would do in a pharmacy environment. Plus, those time management skills will come in handy when your business takes off!

“Above all, support is the key. As well as moving my practice into the clinic, I joined a Facebook group for aesthetic clinicians called Medical Aesthetics Mindset Warriors. They provide emotional and motivational support and I’ve found the community really helpful for both inspiration and practical advice. Sometimes you just need someone in your corner to give you that boost, so my final advice to you is the same thing I tell myself:

“Trust yourself. You can do more than you think you can do.”

A Career in Medical Aesthetics

Are you looking to make a shift into medical aesthetics?

Our delegates enjoy exclusive access to free downloadable resources plus a wealth of support of our SkinViva Trainee Private Network, where we welcome all of the trainee’s that have previously rained with us in BOTOX® and Dermal Filler treatments. It’s a nurturing environment, where there is a culture of no question being out of bounds. Recent trainees can ask their questions to get the support and considered experience of those who’ve been in the industry for many years.

SkinViva Training Ltd offer a range of professional training courses for cosmetic and medical skin treatments. Their courses in cosmetic treatments directed at suitably qualified medical professionals* who wish to learn and build on their skills in delivering these procedures (*subject to meeting SkinViva Training’s entry criteria).

For further information, to discuss which course is right for you, to enquire about availability or to book a training course please call 0161 850 2491, or email info@skinvivatraining.com.